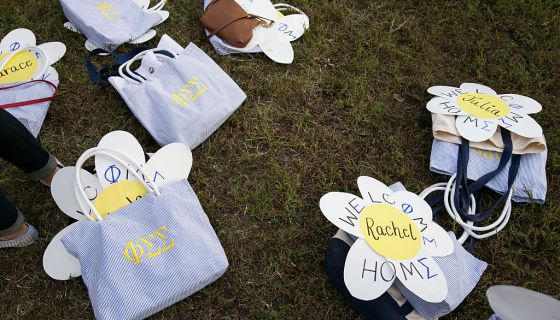 The racist PowerPoint presentation that hung a sorority (watch)

The Alpha Delta Pi sorority has been disbanded indefinitely from Methodist University in Fayetteville, North Carolina, after a member of the white sorority used photos of black football students in a presentation on characteristics which she considered “unattractive”.

She reportedly reported “big nostrils, dreadlocks, and big lips” as physical features she considered unattractive. She also compared them to images of “attractive” white college students. The sorority wanted the presentation to be fun, but after photos of it leaked on social media, the black students whose photos were used and ultimately school administrators became aware of the ‘incident and found nothing amusing.

“I don’t see why something like this is funny. I do not see how it is funny ”, declared Ja-Quez Harrell, a senior Methodist and former member of the football team who received a photo of the presentation the next day. “With everyone who was there, how come no one stopped him?” Harrell asked.

A member of a Methodist fraternity shared with WRAL News a screenshot of an apology sent to one of the football players in the photo, allegedly from the sorority member who made the presentation.

“I didn’t want all of this to be targeted at individuals and certainly not in a malicious way,” she said in the direct message. “It was by no means aimed at African Americans, I can promise.”

Beth wright, a spokeswoman for the sorority’s national headquarters, said her group suspended the offending student’s membership. His group also suspended membership in the university’s sororities chapter. “Alpha Delta Pi was outraged and deeply saddened to learn of the racist behavior of our chapter member Theta Epsilon at Methodist University,” Wright wrote to the Observer. “His actions directly contradict the values ​​of Alpha Delta Pi.”

“Racism has no place in our fellowship,” Wright continued, “and we will continue to work for inclusive spaces and restorative justice in our chapters, on our campuses and in our communities.”

Methodist officials said in a statement Tuesday that they began investigating the incident last week and have already started the process of hearing the students involved. They also ordered Alpha Delta Pi to “cease and desist from all activities” on campus. All of Alpha Delta Pi’s Methodist chapter social media accounts were closed on Tuesday, and representatives from the sorority’s national headquarters did not respond to WRAL’s request for comment.

Methodist is a private university with around 2,000 students, more than a third of whom identify as students of color, officials said.

“Methodist University is committed to the principles of diversity, equity, inclusion and justice. We abhor racism in all its forms on our campus, and we immediately investigate all possible incidents of racism and act accordingly as appropriate, as the facts warrant, ”officials said in a statement.

GO TO THE BLACKAMERICAWEB.COM HOME PAGE

2021-09-22
Previous Post: NEW DEADLINE: Call for tenders for the provision of training services in the field of human rights protection at the national level.
Next Post: How to Use Vector Graphics to Create Cool Custom Graphics in PowerPoint