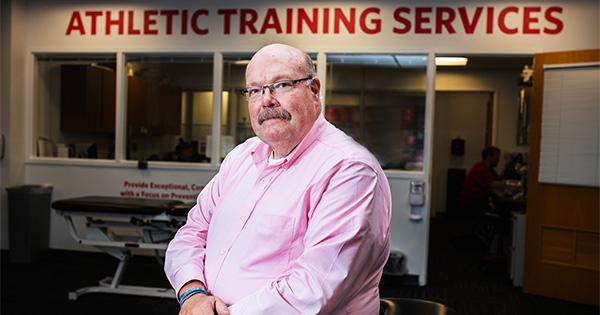 The photo is an icon, like those of the raising of the flag on Iwo Jima or Vietnamese villagers fleeing a napalm attack: a rescue worker wearing a cowboy hat and two others, including Devin Pao (Sargent’14), helping a man seriously injured in the Boston Marathon bombings in 2013. The injured will become a double amputee, but they will save his life.

Parrying the unwanted media attention after the famous photo while struggling with her own grief from that day on became an ordeal for Pao. But his instinct to rush to a human in need amid chaos and confusion is due to a BU mentor: Richard Mark Laursen.

Laursen, director of athletic training (AT) services at BU, taught Pao’s first athletic training course at the Sargent College of Health & Rehabilitation Sciences (athletic trainers tend to treat ill and injured athletes). These early lessons were more prosaic than the treatment of bomb victims – taping an ankle, writing notes – but “his passion for the profession was very apparent, as well as the way he engaged with students so that they are the best clinicians they can be,” recalls Pao, who is now a medical assistant. “What I take away from how Mark influenced me during my time at BU, especially on this [Marathon] day, was: whatever the task, show up, do your job and be selfless. Your patients are the priority and their safety is paramount.

On June 3, her fifth wedding anniversary, Laursen will finally take care of her own well-being. He will move in full-time with his wife for the first time in their marriage, having retired from BU the day before. He moves to Indiana, where she works at a university.

In his 24 years at AT, the last 14 of them as director – a tenure interrupted only by a 10-month stint at the University of South Carolina – Laursen and his team of nearly 30 people have tied broken bones, cleaned gashes, taped sprains and examined concussions among BU’s 1,600 student-athletes playing varsity and club sports each year. He takes his leave at a propitious time both academically and maritally. He is also a Sargent Clinical Associate Professor of Athletic Training, and the college just graduated its last students in Athletic Training. The program is on hiatus due to declining enrollment.

His retirement follows more than two years of AT charge protection from COVID-19, “the biggest public health crisis we’ve had in athletics, ever bigger than a concussion,” he said. Laursen during an interview in his office at Case Athletic Center.

“We don’t know the consequences of this virus,” he said. “I have colleagues, and we have patients, who were infected a year ago and are still having side effects.” At the start of the pandemic, Laursen recalls, “teams weren’t using the locker rooms, they were dressing at home,” showering there after home games.

Away games have prevented taking such precautions, but BU Athletics and AT have implemented other anti-COVID strategies. They embraced telehealth, “dedensified buses, so instead of taking one bus with someone in each seat, larger teams would take two buses,” and implemented rigorous COVID testing, up to two or three times a week during the worst days of the pandemic. .

The University does not disclose infection rates among particular groups, such as athletes. But “given the complexity of student-athlete schedules, which regularly involve travel to other schools, and the natural social groups that form, there were naturally groups within our athletic teams,” says Judy. Platt, director of health and executive director of Student Health. Services, which includes AT. “Ensuring that regular testing cadences could be met as well as all NCAA requirements involved significant coordination between the athletic training medical leadership and the athletic department.”

Laursen’s father coached basketball at a small college in North Carolina, and his passion as a sports healer stems from growing up around sports, not playing them. (“I am a very bad athlete,” he concedes). In recent years, Laursen has had less time to treat students. “I treat some patients,” he says, “although less and less as the work has become more and more important.” The University reorganized AT when he became director, bringing together an array of services that had spread across various BU schools and programs.

“He always gets called if we have a tough case,” says AT assistant manager Jennifer Chadburn (Wheelock’99). And because of his concern and his kindness, his role as a mentor has never been denied. Chadburn recalls the time she neglected to share information she should have given to one of her concussion patients. Laursen’s approach to supervision, guided by the The One-Minute Manager, involves “a sandwich of positivity. So you say something positive, then give constructive feedback, and end with something positive. So I managed to manage a minute… Even though I made a mistake,” Chadburn says, “I walked away from it after I learned something.

“Our department will mourn his loss, but thanks to him, everything will be fine,” she said.

Stories like hers abound. Ryan Stach (Sargent ’22), one of Sargent’s last four athletic training graduates—she became an athletic trainer at Santa Clara University—recalls Laursen cheering her on before her last clinical training. “I was afraid that people would put expectations on me that I couldn’t meet or that I would let people down,” she says. “He laughed at me and said, ‘Ryan, you can never disappoint me, no matter how hard you try. Of course, you will mess up and make mistakes, but you will never disappoint me.

Harvard athletic trainer Pietra Sweeney (Sargent’19,’21) received BU AT care as a Terrier football player. “I knew sports training was what I wanted to do,” she says. “The ATs at BU including Mark are all so amazing and I trusted them – and still trust them – with my life. I wanted to have the same impact on the athletes that they all had on me.

“I wouldn’t be here without Mark,” says BU sports coach Amy Ludovici (Sargent’18). “He makes everyone feel extremely valued and important. So anyone who has gone through this program – as a student, as a student athlete, as a young professional – almost everyone feels like an expert, because it makes you feel everything you do is wonderful. It makes me want to come to work every day. And it made me want to come back [after graduation] and work here.

Christopher Moore, Dean of Sargent, notes that although athletic training instruction is ending, “Mark has been a valued member of Sargent’s faculty for many years. He is an incredibly talented classroom instructor and an experienced clinician. I can’t imagine anyone better prepared to work with our students. His focus on student clinicians and student athletes has been essential, not only in educating future sports coaches, but also in ensuring the safety, health and sustainability of our athletes.