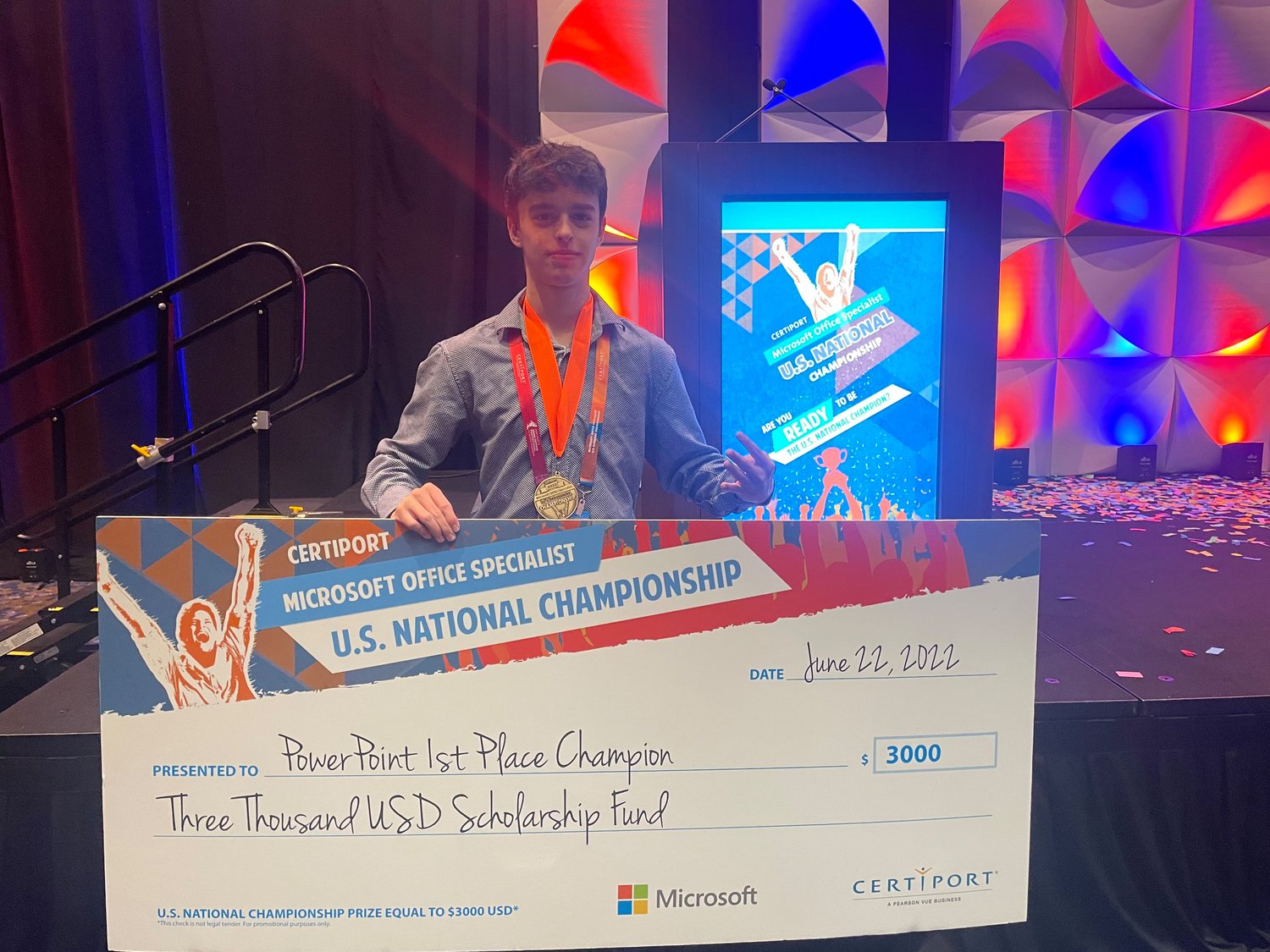 When students create their schedules at the end of eighth grade, most don’t expect their choices to take them across the country for a competition hosted by Microsoft. For Tristan Pesqueira, a recent graduate of East Meadow High School, the lessons he learned as a student in his school’s multimedia classes did just that.

Pesqueira and students across the United States traveled to Dallas, Texas, in June to compete in the U.S. National Microsoft Office Specialist Championship, a competition that tests student proficiency in Microsoft Office Word, Excel and PowerPoint. In the end, Pesqueira came out on top in the PowerPoint division.

For becoming the 2022 Microsoft PowerPoint U.S. National Champion, Pesqueira received a $3,000 prize, a Microsoft Surface ProX laptop, and will compete in the 2022 MOS World Championship in Anaheim, Calif., July 24-27, where he will compete against dozens of other finalists from countries around the world.

“It’s another nice free trip for me,” Pesqueira joked in an interview he had with Tethered and Brave Digital Studios at the Dallas contest.

“These students have demonstrated that despite years of academic and online learning disruption, they have acquired enough skills to compete confidently in a high-pressure environment,” said Ray Murray, CEO of Certiport. . Certiport, a Pearson VUE company, offers performance-based IT certification exams that “accelerate academic and career opportunities for learners.”

Up to 12 people from each state were selected for the event, based on their scores from the qualifying round. More than 44,000 students between the ages of 13 and 22 submitted their scores, and 85 finalists watched the contest live.

“The US and World MOS Championships provide students with an incredible opportunity to test their skills and technical knowledge,” said Rick Herrmann, vice president of Worldwide Public Sector Education, Microsoft. “Every student who leaves this competition is a winner because they have obtained a globally recognized degree that will propel them towards better career and educational opportunities.”

Taught by Samuel Joseph, EMHS offers Multimedia 4, a class where students use programs to learn Microsoft Office and take Microsoft Office Specialist tests that hone their skills. The class also encourages students to earn the MOS certification, which validates mastery of technical skills using software applications and is recognized by the industry.

“EMSD believes it is important to understand the value of these programs in the ever-changing landscape of educational programs so that students are informed of the career opportunities available in the world of post-secondary education,” said Toni. McIntosh, chair of the district’s business and technology department. , said.

During qualifying, Pesqueira spent most of her class time preparing for the competition. “The biggest challenge was studying for the MOS exam, it was quite nerve-wracking to pass all those practical tests.”

Finalists received a printed copy of a document, spreadsheet or presentation to recreate, along with instructions and digital tools. They were then scored based on how accurate the recreation was compared to the original.

“The format of the test was very different from anything I had taken before,” Pesqueira said. “I rushed a bit. The first 10 minutes were spent figuring out how to start the exam. »

Pesqueira advised other students interested in the competition to jump in. “Don’t stress too much,” he said. “If you know most of the program, you’ll be fine.”

Pesqueira will attend Binghamton University in the fall. At Harpur College of Arts and Sciences in Binghamton, the freshman will have time to explore their interests and find what speaks to them.

2022-07-07
Previous Post: Free online courses for students to learn new skills
Next Post: How to Create a Roadmap in PowerPoint