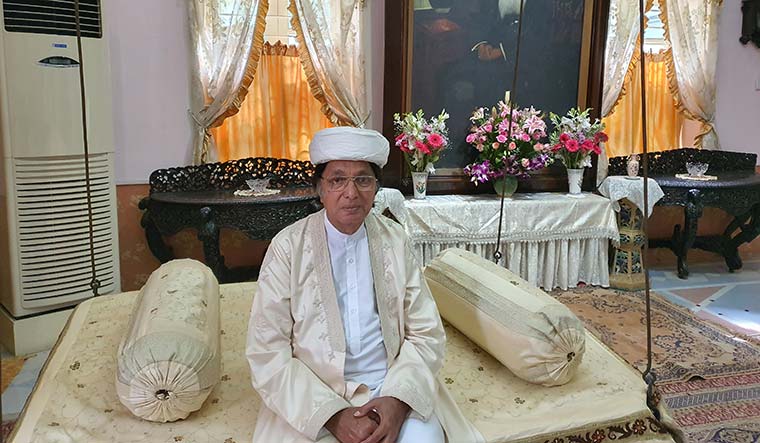 “I do PowerPoint presentations, but the basic lessons remain the same”

Q/ What defines the Mahdi Bagh Institution, and on what principles was it founded?

A/ There is a verse from the Koran, unfortunately used only during mourning or moments of sadness: “To God we belong, and to him we return”. It signifies the purpose of our existence.

We believe that God mercifully sent a series of prophets and books of revelation. We believe that throughout history, since Adam, there have been 1,24,000 prophets who have spoken different languages ​​to different communities around the world. The fundamental purpose of the prophets was hidayat – to preach to the people. The very last prophet on earth was Prophet Mohammad.

But God’s command – amar, as we call it – must continue…. We believe it is Imam Ali, son-in-law and cousin of the Prophet, to whom amar was transferred. After Imam Ali and his sons, Imam Hasan and Imam Hussain, amar was transmitted from father to son. And there have been 21 imams on earth.

The 21st Imam went into seclusion more than 1,000 years ago. But they left an organizational hierarchy – imams, followed by hujjats, who are people who argue, and daees, who give daawat (invitations). Thus, the Mahdi Bagh institution is a daawat, inviting people to righteousness and piety.

Q/ How do you follow the teachings in practical life? Are they different for other Islamic sects?

A/ The underlying principles are the same…. Where we differ slightly from others is that our religious beliefs and teachings take the form of manzum (a poetic form) and are converted into nazms (recitations). So in our spiritual gatherings, apart from sermons, we also sing nazms.

Q/ Does the evolution of times, internet in particular, challenge your traditions?

A/ It is certainly a challenge in the 21st century. But from birth, we become imbued with this culture. Children sitting in a majlis (spiritual gathering), listening to zikr and nazm – this forms an indelible impression in their minds that sustains them. Even if they go abroad, they carry with them these moral values. It’s hard to erase them from your psyche, and that’s what holds us all together.

The internet revolution has helped us keep the majlis online. For example, today’s majlis was broadcast all over the world to members of our community.

Q/ Have you had to change your style, or the content of your sermons, with the changing times?

A/ Now I use English a lot in my sermons. It is easier for many to understand and relate to than fasih and nafees (eloquent and exquisite) Urdu and Arabic. I use modern terminologies. I even use PowerPoint presentations now, but the basic lessons remain the same.

There have also been some changes in clothing. This is our traditional outfit (he shows his kurta-pajamas, headgear and jacket), which was strictly adhered to before. But now I move around a lot, except on spiritual occasions, in my golf t-shirts and pants, like everyone else. Likewise, about 30 years ago, women stopped using the burqa.

Q/ In a small close-knit community like yours, won’t intra-community marriages cause genetic problems?

A/ During the first 30 years after the founding of the institution, new members joined. But about 100 years ago, by deliberate decision, new entries were stopped. Now membership is only by birth. But we haven’t encountered any problems yet. We haven’t seen any birth defects. We feel that we have a very diversified genetic pool.

Q/ Is there a particular emphasis on the empowerment of women?

A/ Yes. After the daee (spiritual leader), the person with the highest spiritual rank in the community is a lady (Moulai Saheba Zainab Lamak). Even before her, this position was occupied by a lady. There is absolutely no [gender-based] discrimination. Women pray in mosques, pursue careers and get involved in all community activities.

Q/ How do you prepare your community to deal with communal problems that are becoming more and more commonplace?

A/ Fortunately, our community has long been highly respected. We have good relations with each political party. Jawaharlal Nehru was very close to the founders and even visited the colony. Now, [Union Minister] Nitin Gadkari is a close friend. We also maintain close relationships with [spiritual leader] Swami Avdheshanand; he also prayed twice in our mosque. Everyone has so much esteem and reverence for us; there really is no room for prejudice.

2022-06-19
Previous Post: Romanian educational platform aims to reduce school dropout with online courses for students
Next Post: Find out how you can design a logo using only PowerPoint